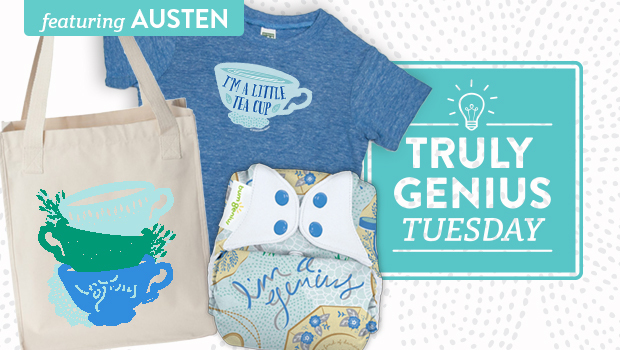 We’re honoring Jane Austen, one of our favorite literary genius, in this week’s Truly Genius Tuesday! Jane Austen was bold… She wasn’t afraid to break the rules! Though her writing didn’t “take off” and gain popularity until after her death, she kept going, following her dream. Her perseverance and strength to push through the stereotypes of her time have made a difference for years to come.

“To be fond of dancing was a certain step towards falling in love.”

“My heart is and always will be yours.”

“We are all fools in love.”

“Till this moment, I never knew myself.”

Jane Austen inspired so many with her beautiful words. From romance to realism, her writing told the story of the struggles and victories of so many women in her time. Full of love, adventure and ultimately, happy endings, her novels broke the literary barriers of her time.

Though her novels told of adventurous women, she herself, lived a relatively quiet life. It was through her brothers, who lived busy lives, that she truly experienced the world, where she discovered new ideas for her writing. From the occasional visits to the stories they brought back from their adventures, various instances in the lives of her brothers inspired Austen’s writing.

In her first few novels, including Sense and Sensibility, Pride and Prejudice, Mansfield Park, and Emma, the author was identified as “a Lady.” It wasn’t until 1817, when her novel, Persuasion and Northanger Abbey, was published that she received credit for her work. Her brother, Henry Austen,  wrote a “Biographical Notice” that was published along with this new novel, finally naming Jane Austen as the author of each of her published pieces.

Jane Austen is an inspiration. Not only her literary talent, but also her strength, passion and perseverance to keep going despite the rejection and timely stereotypes working against her. To this day, Jane Austen is known as one of the greatest women writers all because she chose not to quit.

Today, we’re honoring Austen with all sorts of sales! The following Austen merchandise are on sale TODAY ONLY!

Add Austen to your stash!

Enter for a chance to win this beautiful print to your stash. This week’s Truly Genius Tuesday giveaway includes an Austen bumGenius Freetime, bumGenius Outing Wet Bag and a Genius Series Baby Tee. For a chance to win, tell us what’s your favorite Jane Austen novel!

Eligible entries must be posted no later than midnight Central Time, Tuesday, May 30, 2017. U.S. residents only. Void where prohibited by law. No purchase necessary to win. Winners will be drawn after the close of the contest and notified via email. This promotion is in no way sponsored, endorsed or administered by, or associated with, Facebook. We hereby release Facebook of any liability. All prizes must be claimed within 30 days of end of giveaway.