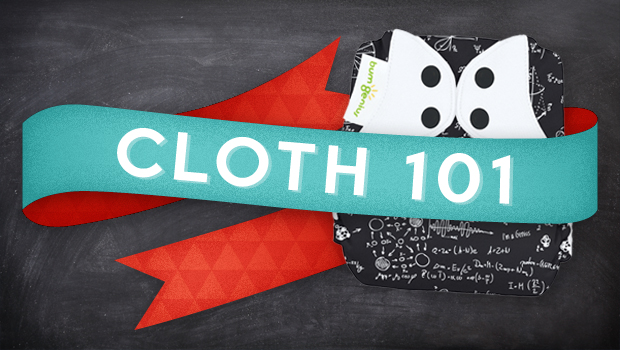 Some parents are hesitant to try prefolds, but really, they’re just as easy to use as modern cloth diapers as long as you know some of the most common folds. Prefolds are considered the “old fashioned” way to cloth diaper, but they are also one of the most affordable ways to do it, too. In this post, we will give you step-by-step instructions on how to fold your prefolds a few different ways.

What do you need to get started?

A prefold, a waterproof diaper cover, and a Snappi.

This is probably one of the simplest ways to use a prefold. However, it may not be be the best at containing runny newborn poop, which often runs onto the cover.

To start a trifold, lay the prefold down flat. Fold one side towards the middle.

Fold in the other side.

Lay the folded prefold inside the diaper cover.

Place baby on the diaper, and put it on.

Start by laying the prefold on the cover. You could also wait to put the cover underneath the prefold until you’re done folding it. You can either fold down the back to make the prefold a bit smaller, or leave the back straight. In this demonstration, I folded down the back. It will also help keep the runny poop from going up baby’s back.

Fold one side in, and under the back “flap” that you made with the first fold.

Fold the other side in, making a trifolded area near the middle of the prefold. There should now be “wings” in the back.

Place the prefold under the baby.

Bring the front part up over baby and pull it out as best you can.

Pull the back wings up onto the front top of the diaper.

This is where a snappi (shown), a diaper pin or a Boingo comes in handy. It will hold the diaper together to make it easier to put the cover on. It’s not 100% necessary if you can be quick and your baby isn’t super squirmy. However, I HIGHLY suggest either!

The bikini twist works best when you know baby isn’t going to poop. It can absorb urine well, but it really won’t contain much in the back.

Once again, I started by folding down the back. This is optional.

Now, just twist the prefold like a wash rag so the bottom is facing up.

Bring to the front and spread over baby.

Pull the back corners up and secure with a Snappi, diaper pins, or Boingo.

The Jelly Roll Fold is extremely effective, especially when it comes to keeping runny poop contained. It may not have the most absorbency since you just have the middle layer of the prefold absorbing moisture, but it will reduce the amount of mess that escapes onto the diaper cover.

Again, I started by folding the back down. This is optional, but this fold is really about containing the poop, so this is a good step to do!

Roll in the sides of the prefold instead of folding them.

Here’s both sides rolled inward to create barriers. This will really help contain a mess.

Bring the front up and over baby, and spread out the top.

Pull up the back corners and secure a Snappi, diaper pin, or Boingo the diaper together.