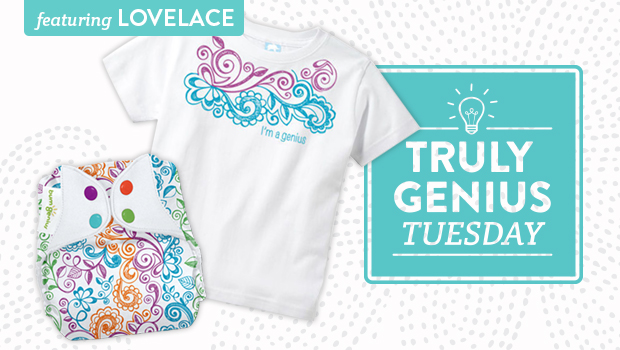 It’s Truly Genius Tuesday! Today we’re going to discover the true genius behind Lovelace. This colorful print joined our Genius Series in September 2011 along with Albert. The Countess of Lovelace is a pretty cool chick. She lived in the 1800’s, but is considered the world’s first computer programmer.

Who is the Countess of Lovelace?

Ada Lovelace was a mathematician who wrote the first algorithm for the first computer program in the mid-1800s. Her contributions to computer science were not discovered until the mid-1900s, but she has since received many posthumous honors for her work. In 1980, the U.S. Department of Defense named its newly developed computer language “Ada” in her honor. In 2009, Ada Lovelace Day was created to raise awareness for women in science, technology, engineering, and maths. Ada Lovelace Day is celebrated every year in mid-October.

Her birth name was Augusta Ada Byron. The Countess of Lovelace was the only legitimate daughter of her father, the poet Lord Byron and his wife, Lady Anne Isabella Noel Byron. Ada never really had a relationship with her father, and her mother was very distant as well. However, Lady Byron did not want her daughter to follow in the footsteps of Lord Byron’s moody, romance-prone nature and tendencies. She was responsible for sending Ada in the direction of mathematics because she herself had a knack for math. Ada’s tutoring started at a very young age, but it quickly paid off. As she grew up, she was recognized in society for her wit and intelligence.

There is something beautifully poetic about Lovelace’s mathematic discoveries. She was able to see into a world of possibilities long before the world of computer science caught up to them. She described her approach as “poetical science.” We think our Lovelace print depicts that beauty. The Countess of Lovelace is a very special part of our Genius Series.

Today only (7/11/17), we have some special sales* on select Lovelace Genius Series merchandise:
Genius Baby Tee Lovelace – $5 off
Genius Pin Set Albert/Lovelace – $2 off

Eligible entries must be posted no later than 11:59 pm Central Time, Monday, July 17, 2017. U.S. residents only. Void where prohibited by law. No purchase necessary to win. Winners will be drawn after the close of the contest and notified via email. This promotion is in no way sponsored, endorsed or administered by, or associated with, Facebook. We hereby release Facebook of any liability. All prizes must be claimed within 30 days of end of giveaway.