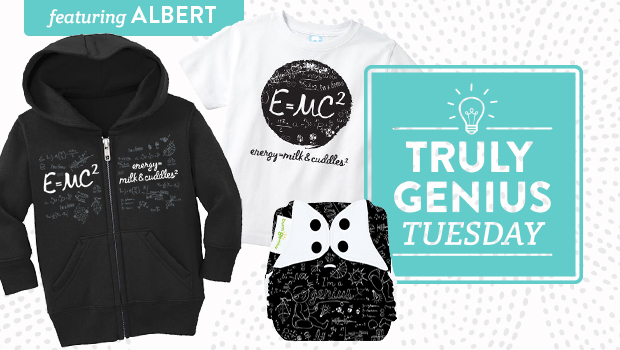 One of our favorite brands at Cotton Babies happens to be one of our own, the Genius Series! It all started several years ago when we were looking to feature prints on bumGenius and Flip cloth diapers. bumGenius has developed quite a personality over the years, and it was important to our team that we tell a special story, so we thought: why not tell the stories of geniuses who inspire us? Through our research, we’ve discovered all sorts of geniuses! From treasure hunters to mathematicians, adventurers to movie stars, each person has used their talents to leave an inspirational mark on the world.

As the Genius Series has grown, it’s been so fun (and sometimes intense) to watch you interact with our Geniuses. Some loved Louis because they’re music teachers, others had to have Austen because they’re “Janeites” at heart, and who doesn’t love Jules… It’s an ever-evolving ride! With our list of Geniuses becoming quite extensive, we thought it would be fun to dedicate some time once a week to revisit why we love each of them so much… Introducing Truly Genius Tuesday.

For our first Genius of Truly Genius Tuesday, we’re featuring the one who started it all – Albert! Albert was originally released in the fall of 2011 and got a facelift in 2015. We love this print. It’s a true classic, in our opinion… Uniquely created by our amazing team of graphic designers, it’s become the definition of the Genius Series.

There are a variety of ways to show off Albert, including the bumGenius cloth diapers (of course). There’s also the Flip Diaper cover, which happens to be a great solution for those who simply want to cover that disposable diaper with a little bit of personality. And then there’s our Genius Series merch, including our Genius tees, hoodies, pins and more! We’ve have some fun, new Albert gear in the works, but in the meantime, you can shop all the Genius Series Albert gear here.

To celebrate our very first Truly Genius Tuesday, we’ve put select Albert merchandise and cloth diapers in the Albert original print on sale TODAY ONLY (1/24/17), while supplies last. Head to the Albert Genius Page to shop these exclusive deals!

We’re continuing the celebrations with a giveaway!

Enter for a chance to win the ultimate Albert Prize Pack:

Albert Einstein was a German-born theoretical physicist. He is best known for “the world’s most famous equation”, mass–energy equivalence formula or E = mc2. He received the 1921 Nobel Prize in Physics “for his services to theoretical physics, and especially for his discovery of the law of the photoelectric effect”. The latter was pivotal in establishing quantum theory. He was truly a man who never stopped asking questions, who devoted his life to searching answers of the universe.

“Nothing truly valuable arises from ambition or from a mere sense of duty; it stems rather from love and devotion towards men and towards objective things.” {Albert Einstein, the Human Side: New Glimpses from His Archives}

Who is the genius that inspires you? Have we featured your favorite yet?

Eligible entries must be posted no later than midnight Central Time, Wednesday, February 1, 2017. U.S. residents only. Void where prohibited by law. No purchase necessary to win. Winners will be drawn after the close of the contest and notified via email. This promotion is in no way sponsored, endorsed or administered by, or associated with, Facebook. We hereby release Facebook of any liability. All prizes must be claimed within 30 days of end of giveaway.