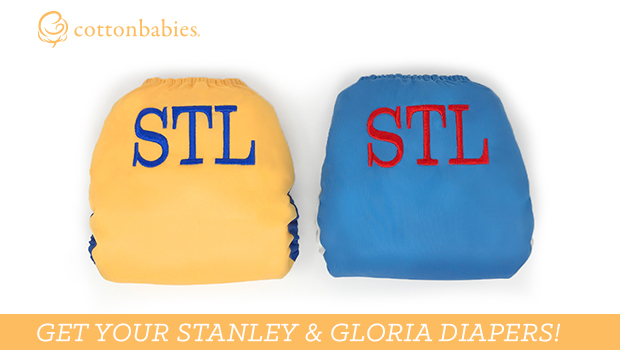 Let’s go Blues! Cotton Babies is based in St. Louis, Missouri. We love our hometown teams and are especially thrilled to celebrate the St. Louis Blues winning their first Stanley Cup… ever!

To celebrate this seriously monumental occasion, we’ve created some special diapers to mark the occasion. You can still get your very own Celebratory Hockey 2-pack we’ve nicknamed Stanley and Gloria.

Our “game 7” ultra-limited edition diapers are made in the Blues’ team colors. Plus, we’ve done something we’ve never done before. We embroidered “STL” on the backs of the diapers.

If you don’t get the joke, we’ll give you the CliffsNotes version of the story: some players were at a bar in Philly that kept playing the 1980s hit song “Gloria” by Laura Branigan. Someone kept yelling, “Play Gloria!” on every commercial break. The next day, the Blues won and the team started making it their own victory song in the locker room. Soon, the stadium’s DJ learned of the ritual and us fans fell in love with it, too. After every win, we crank “Gloria.” It really is a great song!

Get your own Stanley and Gloria diapers ASAP. There are only a few sets left!