My Personal War with China

Last year, when the first few recalls came out for toys with lead, I barely blinked. The toys mentioned were not toys I tended to buy on a regular basis, so I just blew it off. I did notice that a few were from brands that are well known and I would tend to trust inherently. They were big brands, brands I would look for and expect quality from. So my confidence in them was knocked down a notch, but that was about all the thought I gave it.

But as a few more recalls rolled out and Christmas was drawing nearer I began paying closer attention. I looked at all of our toys with some suspicion, especially the ones from brands I had formerly respected. Grandparents were asking what to buy the kids for Christmas and one child had an upcoming birthday. How was I supposed to add toys to my home when I didn’t trust any of them?

Lily was tiny and not yet putting things in her mouth, but those days pass quickly, and virtually all of my baby toys are made in China by that company I used to trust. Max was almost 3 and no longer had a tendency to put things in his mouth, but I still didn’t want to throw my support behind toys that I didn’t trust anyway. For a short time I considered banning all gifts from China. After a few days surveying toy stores and internet sites it became clear that was not a viable option. It was too pricey and with Grandparents who don’t shop online, it would make it very difficult for them to buy the kids gifts.

I nearly despaired of my purchasing policies making any impact on my own home let alone on what manufacturers do. But then I remembered that the smallest action can make a difference. If I don’t change anything because my tiny change won’t make a difference, and others think the same, then no change will come about. But if I buy a few less things made in China, and so do a few other people, then a difference can be made.

Multiply your actions. Consider what will happen if a lot of people to what you are doing. It is something I tell my kids often and it works with both good and bad things. If you spit out your gum in the parking lot you might think, “Fine, what’s one piece of gum?” (other than an annoyance to whoever steps in it!) but if every person who comes through that parking lot spits out their gum… well, you get the picture. If you are walking down the street and pick up one piece of garbage it really doesn’t look any nicer, but if everyone walking down that street does the same thing, it will be a whole lot cleaner.

If you use one cloth diaper a day, it doesn’t impact what you spend per month on disposables much or even how much trash you throw away. At least the difference is very minimal. But if every mom used one per day, then we have eliminated a lot of waste! If I bought one less item from China this past Christmas, and I know others did too, then a change has begun.

Our major purchase this year at Christmas was a new doll house. We had several nice options. The main one in the toy store was not even very expensive. But instead we chose to invest a little more money and buy one that was made in Germany. It cost us over twice as much, but I feel better knowing that it is a safe toy and that my money didn’t go to purchase another lead filled toxic toy.

I try to rotate my children’s toys as much as possible to keep the mess to a manageable level. It does help a little. I have been sorting through things as they are out of sight as well and streamlining what we have to a healthy and worthwhile collection. It is so easy to get bogged down with STUFF nowadays. My children are none the wiser and have not missed a single thing that I have actually purged. I have found that there are toys that might be rotated out, but they are always missed quickly. It is always the most basic toys; blocks, dolls, cars, the toys that allow the most variety of play are missed the fastest. Then there are toys that are never missed until they see them again, in their box in the garage. So as I go along through the next birthdays and Christmases, those are the collections I will be filling out with more non-toxic, better made toys.

And now Lily is the proud owner of three very nice wooden clutching toys. (I was amazed at how she liked them. I knew *I* liked how they felt and looked better than our plastic toys, but at 4-almost-5 months, she showed an obvious preference. But now you think I’m crazy!)

One purchase at a time, we as consumers can demand a difference in what our marketplace offers us. 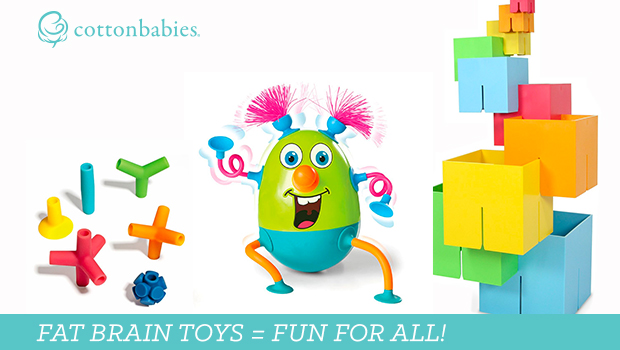 Fat Brain Toys = Fun For All!