When big kids go back to school

Yay! School is back in session! I mean, I think. I was getting a little worn out being Addie’s cruise director everyday. She learned the fine art of being bored this summer but she also managed to ask enough questions that I began to go cross eyed by the end of July. Addie was an only child for the first six years of her life and she’ll go through most of her life as a somewhat only child. She’ll never be in the same school as her sister at the same time, they’re not likely to have the same group of friends and Addie will always be doing things at least six years ahead of her baby sister. Our neighborhood isn’t filled with kids her age and her closest friends are a decent drive away, so school has always been as much about the social aspect as it is about the education aspect.

This morning after Addie was off and gone to school I stared at my baby and thought “Well, it’s just you and me kid.” Which is both lovely and terrifying at the same time. Addie is such an enormous help with Vivi. She’s the first one in with her in the morning and she loves to take her into her room to play. If I need to shower Addie is always willing to help me with Vivi and Addie is a second set of eyes on the baby who likes to climb things and attack the cats.

At the same time, I enjoy the one on one time I get to spend with Vivi, Addie had so much of my undivided attention for so long it’s nice I’m able to give Vivi a little taste of the same thing. Will I be more productive now that Addie is in school? Perhaps, but perhaps not, because rather than Addie being bored? It’s going to be the baby since she doesn’t have her sister around.

I will enjoy going to the grocery store with only one child who can’t run away down an aisle to check out the candy selection and I have a lot of episodes of Project Runway saved up to watch with Vivi each week (well, not with, but she’ll be around.)

It’s going to take us a few weeks to really hit our stride, just like it took us a few weeks to figure summer out. I’m sure as soon as we find a schedule that works, some holiday or school break will come along to ruin it all, such is life, has to keep you on your toes somehow. 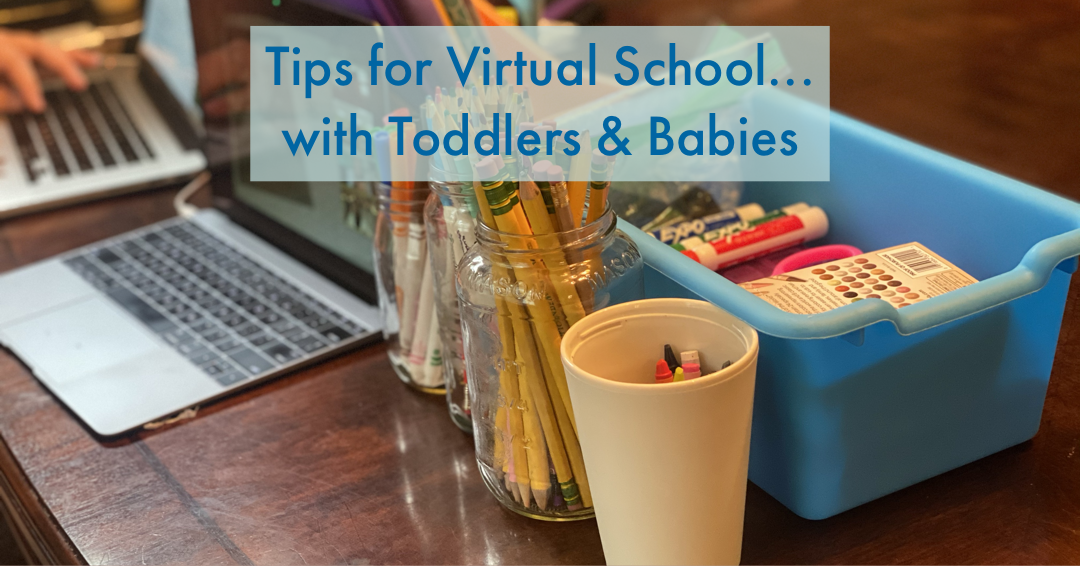 Tips for Virtual School… with Toddlers and Babies