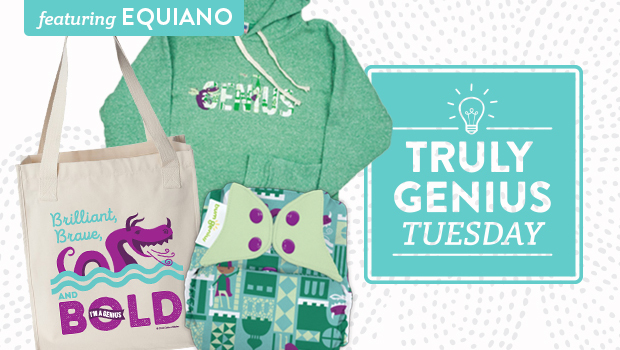 Meet the Genius behind our Genius Series print

Olaudah Equiano, a man of bravery, courage, and strength. When we added Equiano to the Genius Series we learned about a man who endured and persevered until he finally reclaimed his freedom. He later wrote his autobiography, recounting his imprisonment and revealing the horrors of slavery to the world. His first name, Olaudah, means good fortune and symbolizes one who is well-spoken, his writing is a testament to his name, profoundly articulate and full of deep wisdom. In honor of Black History Month, Equiano is this week’s Truly Genius Tuesday featured genius.

Where’d he come from?

Equiano was born in Nigeria in 1745 into the Igbo tribe. He was kidnapped at 11 years old and sold into slavery. He was sold several times over the years but persevered. He learned to read and write, saved his money, and reclaimed his freedom in 1767.

In the 1780s, Equiano became very active in the British Movement to end slavery and many of his fellow abolitionists encouraged him to write his story. Not only did he write it, but published it too! Considered to be one of the first “first-hand” slavery accounts ever written, Equiano’s book, The Interesting Narrative of the Life of Olaudah Equiano, or Gustavus Vassa, the African, was first published in 1789. It soon became a best-seller in England and was published in four other countries. He travelled throughout Europe promoting his book and continued in the fight to abolish slavery.

Equiano’s courage to fight for what he believed in – against all odds – was the inspiration behind this Genius Series print. We are proud and honored to feature this heroic print in this week’s Truly Genius Tuesday!

We’re celebrating this heroic Genius with a sale! TODAY ONLY, all Equiano t-shirts, totes and tumblers are 20% off. And while you’re at it, why not add Equiano to your cloth diaper stash too? This fierce yet fun print is currently available in the following bumGenius cloth diapers and accessories while supplies last:

You know we love to give!

In this week’s giveaway, it’s all about baby… Enter for a chance to win an Equiano bumGenius Freetime and Genius Series Baby Tee!

Eligible entries must be posted no later than midnight Central Time, Tuesday, February 28, 2017. U.S. residents only. Void where prohibited by law. No purchase necessary to win. Winners will be drawn after the close of the contest and notified via email. This promotion is in no way sponsored, endorsed or administered by, or associated with, Facebook. We hereby release Facebook of any liability. All prizes must be claimed within 30 days of end of giveaway.