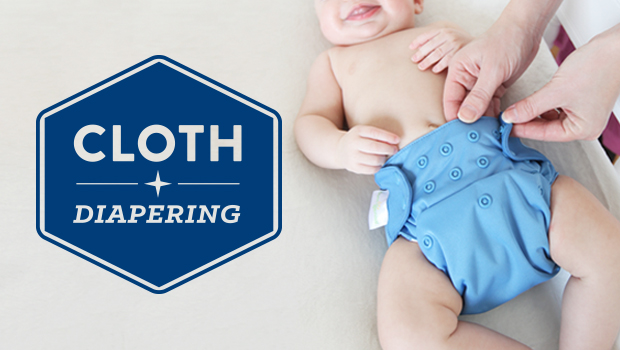 So you’ve gotten over the learning curve of cloth diapering, and you’re loving the fuzzy bum on your new bundle of joy. It’s easy for you because you’ve got your washing routine down and all your supplies where you need them! But what about when it comes time to hand off your little one to a different caretaker? Whether it is a family member, a babysitter, a Mother’s Day Out program once a week, or even regular daycare – talking to someone who isn’t familiar with cloth diapers can be daunting!

My Experience with Cloth Diapers at Daycare

After my son was born, I went back to work and left him with a nanny in our home for his first year. It was a best-case scenario in some ways because we were able to show her the cloth diapers during the interview and explain that we’d show her how to use them. We didn’t have to hire anyone who wasn’t willing to cloth diaper. I was envisioning having to do the washing and drying by myself in the evenings, but it turned out that she became a huge fan of cloth diapers and did all the washing and drying for me! It was amazing. When I quit my full-time job after my daughter was born, she went to work for one of my former co-workers. She still comes to babysit for us, and nearly every time she tells us how she hates using disposables now! She has tales of chemical diaper rashes that just won’t quit, and visions of stinky, poopy diapers never decomposing in landfills. She has told us that she plans to cloth diaper her own children in the future. We created a cloth convert for life!

When my son was 10 months old, we enrolled him in a Mother’s Day Out program two days a week at a local church. I was nervous about talking to the childcare workers about cloth. I even brought a diaper to the orientation, but wasn’t able to meet the actual teachers at that time. The first day of school, I put him in cloth and brought BumGenius pocket diapers and wet bag with me. I packed a disposable diaper in his diaper bag, just in case. I showed the cloth diapers to the teachers and explained the wet bag. They were surprised, but agreed to try it. We had a few snafus, as they would forget to use the wet bag and put the wet diapers into plastic bags – I’ve heard that is a common occurrence with daycare. They also tended to leave my son (and later, my daughter) in a diaper too long so that the diaper soaked through and leaked. I solved this problem by double-stuffing my pocket diapers. I also made it easier for the teachers by putting biodegradable liners in the diapers he wore and the clean diapers I provided, so that they could just shake the poop into the toilet. There were a few times I forgot to do this, and the teachers actually asked me, “Can you put the liners in the diapers? We love those!”. Success!

We even went to a different Mother’s Day Out program during the summer, and again I had no issues using cloth – all I had to do was show the cloth diaper and wet bag to the teacher and they were fine. I loved those teachers because they were great about changing his diaper more regularly. There was hardly any need to double-stuff at all, but I made sure to keep using the liners.

This school year, my son is in the young toddlers class at Mother’s Day Out, which meant new teachers. Again, I showed up for the first day of class with my son in cloth, packing both disposable and cloth options. All I had to do was show the teacher the pocket diaper and she was relieved. “Oh, I thought it was going to be complicated!”, she told me. But the bumGenius 5.0 is just as easy as a disposable, so we didn’t have any issues!

Based on my personal experience and the suggestions of some other cloth diapering mamas I know, here are my few simple tips for introducing your care providers to cloth:

Have you introduced any of your care providers to cloth? What worked and what didn’t? Any tips you might add?

This post was originally part of Real Diaper Week. It is an event that promotes advocacy and education of cloth diapers and leads up to Earth Day and the Great Cloth Diaper Change.