I’ll admit, I’m a nerd. My background is in communications and journalism, after working in a newsroom, it was hard to become a stay-at-home mom. As a result, during my years as a stay at home mom, I spent a lot of time online – reading, writing and communicating. So when I read Jeff Pearlman’s article, “Tracking down my online haters” a few days ago, I went through a series of responses – understanding, surprise and shame.

I understood, because in my years in the newsroom, I learned how differently people behave when they are interacting with a machine versus a person. One of my early jobs was to translate messages from the Op-Ed phone line into “Letters to the Editor.” It was eye opening, and not in a good way, to hear the things people say when they are passionate about a subject. It was shocking to see how much uglier it was when they were shielded by anonymity.
I was surprised by the level of hatred towards a sports writer. I’ve spent years interacting with women, especially pregnant, nursing, sleep-deprived new mamas online. I know how passionate they can be about their parenting beliefs. What surprised me was that this article was about men, exhibiting this extreme passion about sports.
And then I became ashamed. I won’t lie, I’ve been on both sides of the online hate equation. During my more sleep deprived, hormonal, nothing-going-my-way seasons of life my fingers were sharp and quick to lash out at those who didn’t agree with me. I’ve had to make a few online, public apologies before. I’ve definitely learned those lessons the hard way. It’s easy to click ‘post’, sometimes easier than pushing backspace.

“It’s about consequences, and not suffering from any,” says Jacqueline Whitmore, an etiquette expert and founder of etiquetteexpert.com. “There are absolutely no repercussions to writing a nasty comment or e-mail, so people feel they can vent at will. They never think that the person receiving the message might be a real human being.”

Howard Bryant, an ESPN writer says in the article:

It’s the kick-the-dog syndrome. People believe no one’s listening; they think we’re not people, they think there are these giant monoliths controlling thought. Then when they realize someone is listening, they rediscover their manners.

I have to agree with Bryant’s statement. I know when I was at my worst online was when I felt the most powerless in my real life, my babes were little, my house was a wreck and I felt like a failure in multiple areas of my life. I never took the time to really think about how what I wrote would affect the recipient as they read from their screen. I never considered they might have been up all night with a nursing babe, having a rough patch in their marriage or other things not going well in their life. I never paused to think my words might be one more thing on their “crummy day” list. Though it was never my intent, I know that was the end result more than once.

What do you think of Pearlman’s article? Have you been on either side of the online hate equation? What is your process before hitting ‘post’ in response to a touchy subject online? 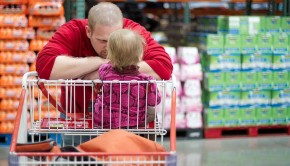 In the trenches of potty training