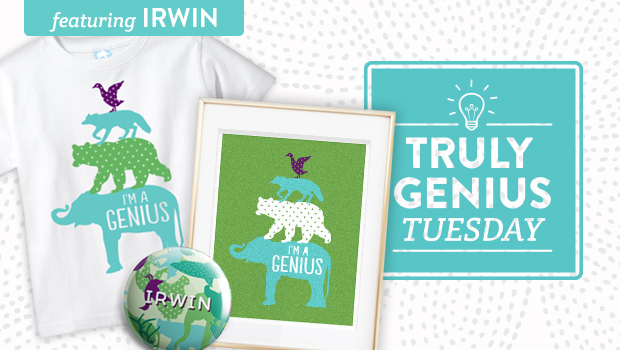 When we started the Genius Series, we were excited about all the brilliant worlds to explore. We began with Albert and Lovelace which come from the academic world, and then we explored genius in the wild with Maathai and Irwin!

Genius in the Wild: Irwin

Steve Irwin was an Australian wildlife expert, conservationist and television personality who was famous for his series, “The Crocodile Hunter.” In addition to his role on television, he made many contributions to wildlife education and conservation. He ran an organization that that not only rescued and protected crocodiles, but also supported a number of animal-related charities. He once stated, “I consider myself a wildlife warrior. My mission is to save the world’s endangered species.”

Irwin cloth diapers are rare to find and must be hunted in the wilds of the internet to find the. Irwin was only made in bumGenius 4.0 cloth diapers with two variations to the snap colors. One version has Grasshopper tabs with Ribbit snaps, and the other has Grasshopper tabs with multi color snaps. We wish we had all the Irwin to make available today, but we’re sad to say… we don’t. Every now and then, we do however discover an Irwin genius in the wild of our warehouse, and to our knowledge, we have ONE in house as of today. In honor of Truly Genius Tuesday, we’re going to give this one away! Enter for a chance to win below.

Enter for a chance to win Irwin!

For a chance to win an Irwin bumGenius 4.0 cloth diaper, tell us what’s your (or your little one’s) favorite animal!

Eligible entries must be posted no later than midnight Central Time, Tuesday, June 13, 2017. U.S. residents only. Void where prohibited by law. No purchase necessary to win. Winners will be drawn after the close of the contest and notified via email. This promotion is in no way sponsored, endorsed or administered by, or associated with, Facebook. We hereby release Facebook of any liability. All prizes must be claimed within 30 days of end of giveaway.